What about Superjack? HW 1.0 Version for two traction motors

When I started to adjust the EGIS positioner, my main motivation was to put the device into operation, in which I invested quite a lot of money. Gradually, it became apparent that the redesign of the control electronics could significantly increase the utility value of the entire set. Nevertheless, I was aware that there would not be many owners of such facilities, so people would be interested in my reconstruction more out of curiosity. They will take my efforts as a rarity.

But when I put the HW 1.0 prototype into operation and started testing, I thought of the possibility of further experimentation. The whole EGIS positioner is actually just two ordinary DC motors that have a speed sensor in the form of pulses. All this is hidden in a nice little case, but apart from mechanical transmissions, there is nothing more.

The traction motor is also driven by a DC motor. And it also has a speed sensor in the form of pulses. Couldn't my device be used to control two traction motors? Traction motors are not so expensive and many fans of not only satellite technology really use them in practice. Whether by classic rotation in the azimuth / elevation directions, or by rotating the polarmount and adjusting the elevation deviation. This would greatly expand the circle of people for whom my development could be of practical benefit. Even if only in the form of inspiration. Therefore, I will try to elaborate this idea a bit theoretically. 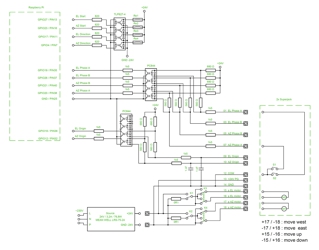 Since speed sensors for traction motors are only a mechanical switch controlled by a magnet, it would be appropriate to add filter capacitors to the input terminals, such as at the inputs of terminals 09 and 10 - Origin.

The biggest problem could be the supply voltage of the motors. Traction motors are also manufactured for 24V voltage, but I think that the variants with a 36V supply are the most used in the Czech Republic. But that wouldn't have to matter for the first attempts. The engines will probably only turn a little slower and have less power. This could work for smaller dishes. If that wasn't enough, he would have to use a 36V power supply and a relay with a 36V coil. For example, the MEAN WELL LRS-100-36 switching power supply. It looks worse with the relay, there is not so much choice for 36V. But 6x SRD-36VDC-SL-C could be used. The question is whether, when the voltage increases by 12V, it would be necessary to reconfigure the input resistance network so that the input LEDs in the optocouplers are not overloaded.

It will be similar with the control program. For the first experiments with minor restrictions, it should be applicable without any modifications. The basic principle of operation is the same. Position search based on counting pulses from sensors. The only difference between the EGIS and the traction motor is the detection of the starting point - the zero point. EGIS has a special Origin switch for this, which is tested to determine the starting position. Traction motors do not have such a switch. They have limit safety switches through which the main supply current to the motor flows. These switches are not led out of the traction motor and the reaching of the initial position is recognized only by the fact that the pulses from the speed sensor stop coming into the device.

In practice, this means that no functions requiring zero point detection will be usable. But everything else should work. That is, four buttons for manual control of movement left, right, up and down. After finding the satellite, store the status of the pulse counters in the presets. And after filling the presets, the automatic reset to the selected preset / satellite will work.

I was very excited about this possibility, which I did not plan or prepare in advance.

No thoughts on “What about Superjack En”